Everything hurts. And here’s why.

Yesterday Bunky and I particated in Melbourne’s Great Amazing Race to raise money for the Royal Children’s Hospital. That last bit is a little misleading: while we did raise money for the hospital, that was probably just an added bonus. We participated because it’s awesome. </p

The day starts with 500 teams assembling for registration and a briefing. At 10am, clue sheets are handed out and madness ensues.

The aim of the game is to unscramble clues then collect 500 points:

How you collect the points is up to you.

This wasn’t our first rodeo. After participating last year and learning our long, sweaty lesson, we weren’t amongst the hordes who immediately bolted off to gather the nearest points. Instead, we plonked ourselves down to start solving riddles and plotting where our day would take us. Points were placed everywhere: South Wharf, Richmind, DeGraves St, Albert Park.

Scheming compete, we jogged to The Celtic Club to take a violently bouncy Irish dancing class, nipped across the street to the Welsh Church to count pew numbers, then to a fitness studio for an 8-minute fitness challenge, after which it was time to whack golfballs at a screen at golf simulator, GolfTec, before finding the National Trust Building in leafy East Melbourne. A tram took us to St Bartholomew’s Church (‘A church named the same as Homer Simpson’s son’) in Burnley to start the Amazing Race leg. There we followed a series of clues, ran wildly around Richmond, learned a circus hula hoop routine and took the (mildly terrifying) drop slide at Clip n Climb before we co-operated with another team to solve maths problems relating to being environmentally friendly.

After that, it was over to Melbourne Park (energised by a few “treat size” Killer Pythons — nice try, Allens Confectionary, but you make them smaller and we just eat two) to find a bridge named after Australia’s first Olympic gold medal winner (Edwin Flack everyone) and then play some bubble soccer (Google that for a giggle). A tram then took us down to the end of the world (farthest Docklands) where we learned to Dragon Boat and then got one hell of a core workout while being yelled at by our boat’s ‘sweep’. Finally, almost out of time, we detoured around to the ‘artistic’ (oh, Docklands) Reed Vessel bridge to count animals before making it to the end point just on time. And collapsing.

You can imagine how I wanted the rest of my day to unfurl. Yeah, that’s right, home-made pizza, back to back episodes of Criminal Minds and a bath.

Instead, I rushed home and, pausing only to rip off my (sexy) bike shirts and tank, showered, threw foundation in the general direction of my face, pulled my non-shiny hair back into a chingnon, slicked on a Nars Red Square lip and blackened my lashes, pulled on and zipped up a slinky red Collette Dinnigan number and co-erced my poor feet into a not-yet-broken in nude Zara pumps. With a spray of J’Adore, I was engagement party ready.

Back in our first year of playing corporate lawyer, a law firm friend, the uber tall, uber blonde, uber stylish, uber smart ‘Poodle’, had fallen headlong in love with a junior partner at our firm and, earlier this year, they had become engaged. Fast forward a few months and — surprise — a baby Poodle was ruining best-made abdominals and best-laid plans. Naturally enough, the couple pushed back their wedding back to 2015 but invited friends and family to a pre-baby spring garden engagement party instead.

Now, outside the party at Poodle’s family home, I could hear a string quartet and a hum of polite conversation. I took a deep breath, silently bemoaned my awkward tank top tan lines from today’s adventures and smoothed my hair. I stepped in through the flower-festooned front gates and wound my way through the gardens, past the tennis court and into a thick of the bright-eyed, well-heeled and smooth-maned. Collecting a champagne (rehydration?) I sought out the gorgeous guests of honour.

They were easy to find, for the Poodle is of course radiantly pregnant (and you think Blake Lively carries well). And in a wedding dress. It seemed the day was not yet out of Amazing: the happy couple had slyly married that morning and the slick affair I’d just walked into? The surprise wedding reception. 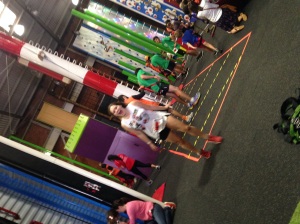 Great Amazing Race 2014: Survived the slide of doom. You might not be able to tell, but all the kids in the background are, like, totally terrified. 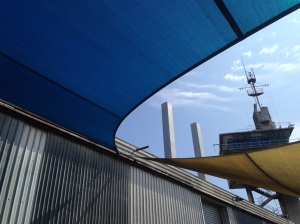 Great Amazing Race 2014: The end of the world (aka Docklands)