Location: On the couch. Procrastinating researching trends in indemnity insurance in private equity deals in Australia and the UK and missing The Bachelor. Truly, though, wouldn’t you?

You may read what Bunky had to say in her Part I right here. You can get introduced here. Or read about the time I taught her how to pee behind a car in the Nevadan desert here. Our even our love affair with the Texan quick step here.

When thinking about my “angle” for this piece, I mulled over a number of topics- my weekend adventures, my romance with the powerjam, events of the past from my perspective, perhaps a rant on something or another- and realised all these things were about me. Instead, given this blog is essentially the trials, tribulations and musings of Alex, the obvious answer to my angle dilemma, is Alex herself. Or at least the Alex that I know- the one who wrote me letters when I was younger and who now emails and texts me every day, to the extent that if I don’t hear from her, I wonder if she has been eaten by Alsatians… or her cat.

My qualifications are long and varied on this subject matter- 26 years we have known each other and, from my perspective at least, I can say unequivocally that for the majority of these years she has been my best friend. We’ve been through all the life stages together; party shoes, mud balls, tamagotchis and all products Moose, ear piercing, nail polish, periods, awkward teenage years, the boost juice phenomenon, butterfly clips, overalls (both short & long- gotta stay seasonally appropriate people!), dancing classes, boys!, first kisses, alcohol, formals, VCE, uni, boys!, uni balls, part time jobs, bye bye virginity, Room, Cheers and 7even nightclubs, graduation, first job, boys!, a real income, bars, suits, the hunt, boys!, love, hate, buying houses, moving out of home, divorce, progressive dunches, boys!, friendship breakdowns, new friends, argh 30 is approaching!

So, how do I condense 26 years into a paragraph or two? Impossible really. If you get to the crux of it, the reason this blog came to be was because Alex quit her lawyer job, eat, pray, loved India and two-stepped the US and is now focusing on what’s next. Casual observers may not realise quite how much of an epic decision quitting her old life was and how many barriers and projections of herself Alex has had to shed to reach this point.

If you asked people to describe Alex in one word, you’d get two answers. One is crazy-smart (the dash totes makes that one word). The other is intimidating.

I don’t know anyone else with as much random crap general knowledge as Alex. I’ve no idea where she picks it all up, but ask an obscure question that you don’t actually expect an answer to and you can guess that she will pipe up and actually have something that sounds halfway reasonable. I have often wondered whether she knows the answer or is just really good at making stuff up to seem legit- now I think about it, I’ve never really fact checked anything she’s told me, I’ve just taken it as gospel. Also, fun Alex fact- she has to be one of the only people alive who has actually memorised the capital of every country in the world. Capital of Togo? Lome. Obviously.

On the flip side, Alex can be intimidating. I don’t even think she realises it herself, but she fills up a room. Alex is social glue. When Alex is around, and you are part of the inner circle, its great; conversation is flowing, fun happens, shenanigans occur and the playlist is spot on. But if you’re on the outer, maybe you wouldn’t see it that way. As Heidi Klum would say, if you’re not in (with Alex), you are out. If you’re out, its likely she wouldn’t even notice if you were in the room. Too bad. In this way, Alex is polarising, which is why I think people either see her as; funny, quick witted, knowledgeable, confident and loyal or the complete opposite; dismissive, outspoken, careless and over bearing.

Alex lives on an emotional rollercoaster. Its almost like there are two Alex’s; Alex A- the boisterous, social butterfly, always out and about, loves a drink and then the other Alex, Alex B, who questions herself, is easily disheartened and can be very glass half full. For people who only see Alex A, I think they might underestimate how much of a toll being that person can be and that the other half of her craves validity, time alone and can be extremely vulnerable.

For a long time, Alex was the person who cared what everyone else thought about her and was, to an extent, incredibly competitive about the way she maintained her “brand”. The pressure she felt to maintain this carefully cultivated image, both in her own eyes and especially those of her parents is what took her into law in the first place. Never mind that Alex has always been a creative person, with excellent vision and beautiful with words. Law is the opposite of this, creating boundaries and discouraging creativity. But having a law degree looks and sounds good. Having a law degree from a prestigious Melbourne institution? Even better. Never mind that maybe Alex wasn’t meant for law. I think her passion lies elsewhere and I’m glad, after years of flogging herself to maintain an image, hating every second of it, she has finally shed that skin and stepped away from the vision she wanted to project on to others and is instead taking the time to consider what she wants to do, what makes her happy and fulfilled.

Quitting her job has changed Alex, in all ways for the better. For the first time, she is just being herself, the good, the bad and the ugly, all hanging out. She is smart, witty, creative, organised, well read, observant, emotional, knowledgeable, somewhat narcissistic, funny and open, all unique qualities she should embrace and use to her advantage. I can tell this freaks her out and she often falls back on her former ideas of what she thinks equals success in life, however this time, I really hope that she follows her dreams, regardless of how she feels other people will see her, because I truly believe she has the opportunity right now to pursue what makes her happy and set herself life up for an incredibly successful future, on her own terms. 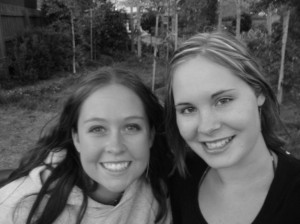 It’s early 200s and I wish no one had ever let me get highlights. 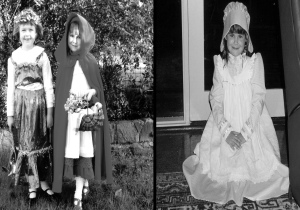 It’s 1991 and we’re bonding over a shared interest in dressing up that endures today.

It’s mid-2000s and we’ve just spent an entire afternoon on the beach making a sandcastle. 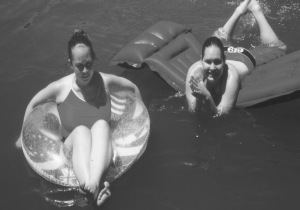 It’s 2002 and we still haven’t figured out this bikini business.

It’s 1994 and we’ve both just won awards for our plaster trees. I feel I was mislead by primary school as to what ‘succeeding’ in life entails. 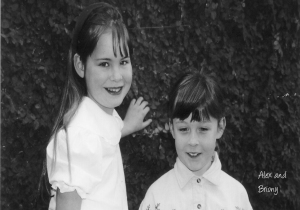