I turn around. Before me is a stereotypical American guy, about the same age as my dad, in a baseball cap and an Italian soccer shirt. I'm really very tempted to retort with a gallic shrug and a, “Non, je ne parle pas l'angalais,” but I don't. I'm very clearly reading an English book and what if we're stuck in this line for the gallery for ages and I need to ask someone something and have to do it in French?

“Is this the line to collect pre-purchased tickets for the Uffizi?”

“But you don't know?” He challenges. God, I wish I'd gone with je ne parle pas l'angalais.

“So it's the blind leading the blind?”

He settles back into silence until a uniformed gallery worker comes by and clarifies that this is indeed the right line. Then he picks up with the guys behind him. I bury my nose in my book but my ears are curious. I always think it somewhat aggressive to force chat upon people stuck in your company — people in queues with you, the guy next to you on the plane — but Americans seem to love it and even I can see why some personality types do it and even think it's courteous. My introvert brain thinks it's hell.

“Where're ya from? Argentina, hey? How's that economy going? That bad? Do you all measure unemployment rates? Uh-huh, uh-huh. Well now.”

They chat for a while. Then there's silence. Clearly bored again, our friend swipes at my book to read the spine.

I carefully mark my page and hand it over.

“Don't mind me!” He chuckles, turning the book over.

“It's Margaret Atwood,” I explain, thinking that I had very little choice in minding him or no.

I nod, thawing a tiny bit. People who like books are never all bad.

“Australia. But I live in London now.”

“Studying?” I get this a lot, and I say as much to the American.

“I'm a lawyer.” This visibly piques his interest and I continue to thaw.

We chat work and London for a while. I ask him what he does.

He leans in. “Do t hold it against me now, but I'm a member of US Congress.”

For a moment I think he's joking but his expression is sincere. (Later I Google him and quickly discover that he's legit, a Denny Heck, democrat representative from Washington State.)

The conversation moves on. He asks me a really interesting question about how I see as the differences between theatre in the West End and theatre on Broadway and we natter cheerfully about that. He explains he's here with his wife to celebrate 40 years of marriage. I get tips, just in case. By this stage the Ice Age is over, I'm charmed. We talk Canada, politics (oops, but thankfully he's a democrat), Italy, theatre. About ten minutes later we're at the front of the queue and we say goodbye. Later, in the gallery, we run into one another at the cafe and natter like old friends about the art we've seen so far.) The whole episode bears writing about because it was so out of character for me yet so undeniably pleasant. I make a mental note of it.

With a train to catch in 1.5 hours I take a very speedy tour around the Uffizi. I send quiet, sincere apologies to the whole Leonardo exhibit which I have to skip past in order to spend a bit of time perusing the sculpture corridor, admiring the Boticellis and goggling at, my favourite, the Caravaggios at the end. Then it's out into the brilliant sunshine, collecting my bags, rushing to the train station, pausing for gelato (tiramisu, the best) and throwing myself onto the regional train through Tuscany.

Arrivederci Florence, I do love you.

It's been magical to come back to a city I know. And Florence is just how I remember it. Impossibly blue skies set off by the brilliant white of the towering Dumo. Terracotta buildings studded with balconies and tousled crimson flowers. Beauty around every corner. Labyrinthine old streets in a layout that makes no sense. Gelato stores everywhere. Americans everywhere. Despite my familiarity with their twists and turns, I still get horrendously lost walking the cobblestone streets. My pedometer app's map from my self-guided walking tour yesterday shows what looks like the web of a very confused concussed spider.

And, when I reflect, gazing at Caravaggio's Bacchus — whose warm, weird beauty is somehow stuck so firmly in my non-arty mind from a decade ago, I think I'm just the same too. Sure, I stay somewhere way nicer (my beautiful boutique hotel is on Via de' Tornabuoni, its entrance sandwiched between Gucci and Cavalli storefronts) that costs what would have easily been a week's rent last time I was here, and my wine choice isn't always the €1.50 Chianti any more, but I don't really feel much different. I'm still delighted by own company and feel a hedonistic a d beautiful freedom of the prospect of 30 hours alone in this stunning city. Sometimes, though I try not to, I wonder if there's something wrong with me that I so enjoy my last own company.

By accident I stumble upon the place where my first serious boyfriend and I wrote our names on a padlock, locked it to the fence and threw the key into the Arno. It's gone, as are all of the other thousand locks that used to be there. This both gladdens and saddens me. Then I go have a wine by the Arno and he gets tucked back into the folds of my memory, where he belongs.

Cute as a button rooms at Room Mate Isabella. 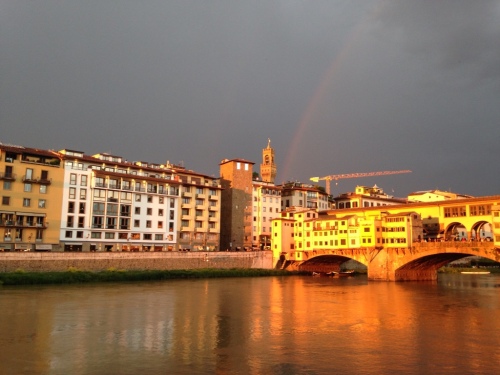 Who's a shameless tourist?

The 'is this for real' view from the Uffizi.

The roof at the Uffizi is Art in itself

Even more stunning -- and huge -- in person.

And finally, snapping out of my nostalgia, a public service announcement for anybody going to Florence/myself, for I'm sure to be back:

Eat: the carbonara at I Buongustai, by Piazza Signoria. The place is run by a fierce troupe of little wiry women who seem to seamlessly move from cooking in the open kitchen to shouting coffee orders to serving. It's amore.

Drink: a Tuscan nobile wine, at appertivo time, at Signorvino on the oltrarno (the far side of the river). Reserve a table on the balcony overlooking the Arno. Order wine and get a complimentary antipasto box. Order another.

Stay: at Room Mate Isabella. The rooms are unique and lush, the service delightful and breakfast perfection (I almost used the 'perfecto' hand emoji here as it better expresses how I feel about the whole experience.)

One response to “The offices”